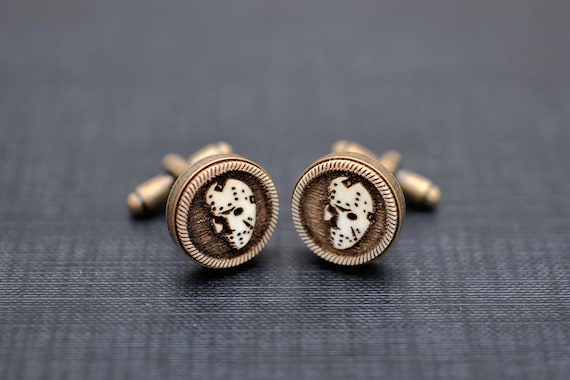 These wonderful cufflinks are etched with the famous "Friday the 13th" mask;

They are made engraving an acrylic sheet and afterwards hand painted and aged.

The gift box is included in the price and makes it a great idea for a gift.

Our cufflinks are fully and proudly hand made in Italy.

Looking for something else? Check this out:
More cufflinks from our shop: https://www.etsy.com/shop/GothChicAccessories?section_id=13044363

A cufflink (also cuff link or cuff-link) is a decorative fastener worn by men and women to fasten the two sides of the cuff on a dress shirt or blouse.
The forerunner of today’s shirt first appeared in the early-16th century, its ruffled wristband finished with small openings on either side that tied together with "cuff strings." Although cuff strings would remain popular well into the nineteenth century, it was during the reign of Louis XIV that shirt sleeves started to be fastened with boutons de manchette, or "sleeve buttons," typically identical pairs of coloured glass buttons joined together by a short, linked chain.
By 1715, simple, paste-glass buttons had given way to pairs of two, decoratively painted or jeweled studs, typically diamonds, connected by ornate gold links.
Hence was born the cuff "link", whether simple glass buttons or gilded and bejeweled studs.
Cufflinks are designed only for use with shirts which have buttonholes on both sides but no buttons. These may be either single or double-length ("French") cuffs, and may be worn either "kissing," with the ends pinched together, or "barrel-style," with one end overlapping the other. The "barrel-style" was popularized by a famous 19th century entertainer and clown, Dan Rice; however, "kissing" cuffs are usually preferred.
Cufflink designs vary widely. The simplest design consists of a short post or chain connecting two disc-shaped parts. The part positioned on the most visible side is usually larger; a variety of designs can connect the smaller piece: It may be small enough to fit through the button hole like a button would; it may be separated and attached from the other side; or it may have a portion that swivels on the central post, aligning with the post while the link is threaded through the button-hole and swiveling into a position at right angles to the post when worn.
"Dumbbell" or shank-style cufflinks were popular during the early-20th century, particularly in America.
The visible part of a cufflink is often monogrammed or decorated in some way. There are numerous styles including novelty cufflinks, traditional cufflinks, contemporary cufflinks, utility cufflinks, and humorous cufflinks.